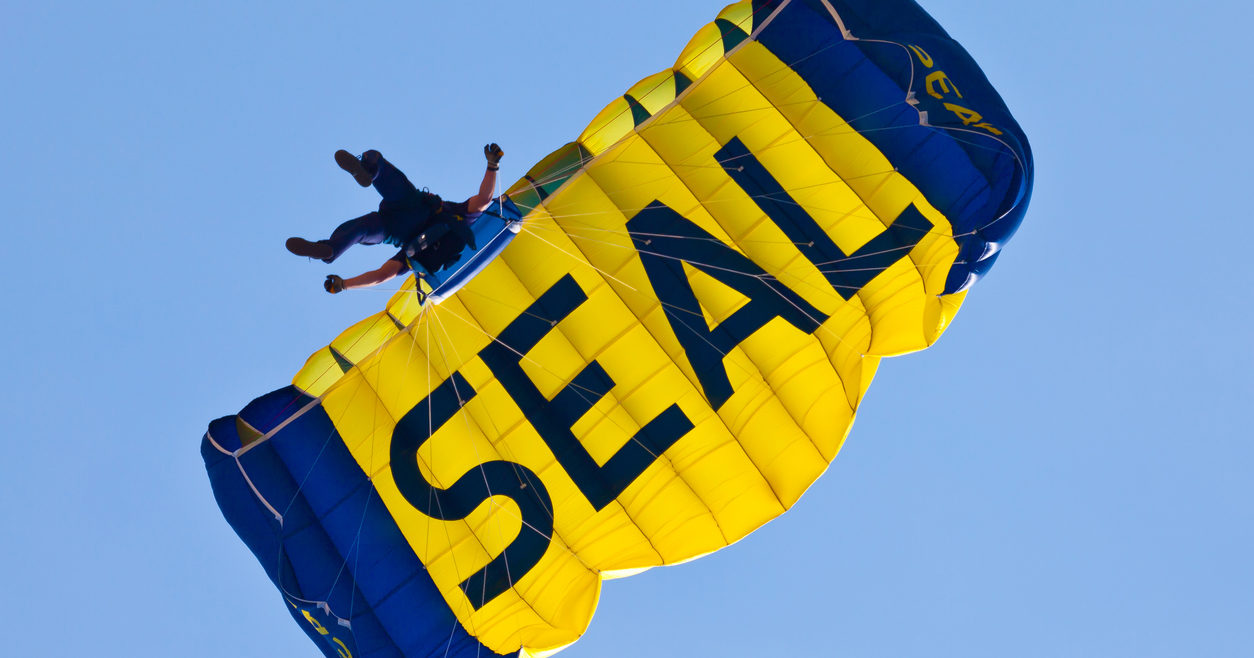 The Navy SEALs are the best of the best, and not just anyone can make the cut. Of the many who try, only a small percent of recruits have the prancing, whistling, and juggling skills needed to make it through the grueling training and join the ranks of the Navy SEALs. Do you have what it takes? Take this quiz to find out!

During the infamous “Hell Week” portion of training, SEAL recruits must prove their mettle under extreme mental and physical duress. One of the many arduous tasks recruits face is running over 200 miles on next to no sleep. What strategy would you employ to make it through this grueling challenge?

1. I would attempt to trip over as many rocks and debris as possible with the hope that the constant tripping would constantly propel me forward without having to expend much energy.
2. I would lay down on my side and start rolling until I got some good momentum going, then fall asleep and trust that I would keep rolling.
3. I would jog at a brisk but steady pace, as I believe that this is a more efficient means of locomotion than prancing.
4. I would prance as I have never pranced before, gliding effortlessly like a gazelle, my feet barely touching the ground as I leap, spin, and twirl across the muddy terrain with balletic grace and jazzy flair.

Due to the nature of their work as one of the most lethal special operations forces in the world, it’s critical for Navy SEALs to be able to whistle loudly and beautifully. How would you use whistling to neutralize an enemy combatant who ambushes you while you’re unarmed?

1. I would attempt to scare him off with a very loud burst of whistling but then immediately get a tongue cramp that renders me unable to whistle, leaving me no option but to surrender.
2. I would let out a short, faint whistle and pray it does the trick, as that’s about all I can do whistling-wise.
3. I would go to the nearest jukebox and play a song with lots of whistling in it, then lip sync along with the whistling to trick the enemy into thinking I’m an elite whistler who should not be fucked with.
4. I would peel off my shirt and whistle the entirety of Liberace's “Easter Parade” while performing a dazzling array of prances and juggles in perfect synchronicity until the enemy runs away screaming into the ocean.

Whimsical and well-choreographed juggling performances during combat are a specialty of Navy SEALs that never fail to strike fear in the hearts of foes. What innovative and jaw-dropping juggling skills would you bring to the battlefield?

1. Oh, gosh, I don't know. Not really sure what juggling is, honestly.
2. I can only juggle eggs, but I can do it VERY well.
3. Nothing is too sticky for me to juggle. Well, actually, I take that back, sometimes plums get too sticky if they’re really ripe and the skin has split. But as long as there’s something to juggle besides plums, I am downright deadly.
4. I can juggle three M4A1 automatic carbines in 5.56mm caliber with bayonets affixed WHILE they spray bullets in all directions. And I can do it with a big smile on my face.

Strength, endurance, mental toughness, intelligence—none of these traits mean a damn thing to the SEALs if you can't really prance your ass off. Describe how you would use your prancing skills to deadly effect while extracting a captured comrade from a remote terrorist compound.

1. I have not received any formal prancing training, so I suppose I would just hop around in place for a while and hope that it does the trick.
2. I would do my best to prance, but I’m honestly more of a skipper. Skipping’s pretty much the same thing as prancing, right?
3. The first thing I would do is look at my prancing manual and see what kind of prancing it recommends. Slow and clumsy? Frantic and festive? I'd just follow what the book says.
4. From the moment my feet touched the ground after rappelling out of the helicopter, I would execute a jaw-dropping series of prances that would fill the enemy with awe and terror. I would prance faster and faster until I became a dizzying blur and then descend on the terrorist compound like a banshee out of hell, prancing every which way until all the enemies were dead and I could safely free my fellow SEAL.

The life of a professional soldier can be brutal, and the things you see as a Navy SEAL will be etched into your memory forever. You must be prepared to lose close friends, witness atrocities no one should have to witness, and live with the extreme violence you will be committing as an elite warrior. How would you protect yourself from being destroyed mentally in the face of all these bleak realities?

1. I would try to cheer myself up by whistling terribly.
2. I would try to cheer myself up by whistling a discernible yet off-key melody, as this is the best I can do.
3. I would wear a bracelet that says "WHISTLING" to serve as a constant reminder of the beautiful sound of whistling.
4. I would set aside an hour each morning to whistle a grand and glorious tune full of runs, slides, and complex tempo changes that fills my heart with patriotism and inspires me to keep fighting to keep our nation free and safe. And in particularly difficult moments, such as when I am watching a fellow SEAL die on the battlefield, I would whistle the same tune but much, much louder, drowning out all my sorrow and fear with the awesome power of whistle noises.

Your squad is pinned down by sniper fire. You take cover behind a crashed helicopter, but it's only a matter of time before the shots take you all out. What would you do in this situation?

1. I would tiptoe slowly out from behind the helicopter, hiss out an airy, wet whistle in an attempt to draw fire, and juggle a live hand grenade until it exploded in my hands, instantly killing me and everyone in my squad.
2. I’d do a high-legged walk out from behind the chopper, whistle “Shave and a Haircut” at an incredibly quiet volume, and then juggle my radio like a jackass until the sniper took me out.
3. I would walk out at a relaxed pace from behind the helicopter, blow into a referee's whistle to call a timeout, and then juggle handfuls of sand in an attempt to make the air all cloudy so that it obscures the sniper’s vision.
4. I would prance like I have never pranced before out from behind the flaming helicopter wreckage, perfectly whistle a spectacular array of classic and contemporary hits, and juggle 12 rocks so deftly that I manage to deflect the sniper's fire until they run out of ammunition.

You are separated from your squad behind enemy lines. Your radio is dead and it's been days since you've had food or water. Surrounded by featureless desert in all directions, a convoy of heavily armed enemy troops approaches you. What would you do?

1. I would quickly page through the Navy SEAL prancing handbook as a refresher, spit all over the front of my shirt while futilely attempting to whistle, and yell “Juggling!” over and over again as I got shot to death.
2. I would just hope that the enemies would take pity on me when they see how poorly I am prancing, whistling, and juggling.
3. I would prance right up to the enemy leader, whistle right into his eyes, confidently light three batons on fire, and then start juggling the batons in a mesmerizing fashion to buy time while I scramble to think of what to do next.
4. I would prance, whistle, and juggle with such devastating skill that the terrified enemy convoy pretends not to see me and drives right past.

Okay, just one last question before we can tell you if you have what it takes to be a Navy SEAL, but it's an important one. What is the biggest sacrifice you have ever made in order to juggle?

1. I never have sacrificed anything in order to juggle.
2. One time I was a little late to work because I was watching juggling on TV.
3. A lover once broke up with me for juggling during sex.
4. I once skipped both my father's funeral and my daughter's birthday, which fell on the same day, in order to juggle privately in my bedroom.
All 8 questions completed!