Eliminating Confusion: President Trump Has Forced Eric To Get A Gigantic Hoop Earring So That He Can Tell Him Apart From Don, Jr. 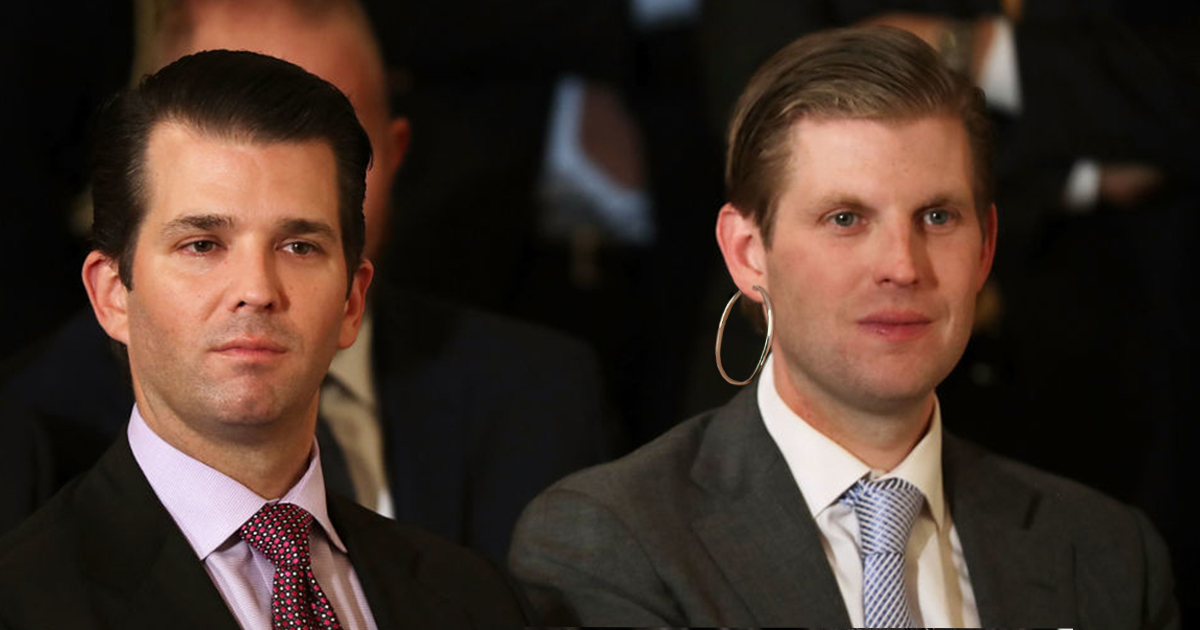 Countless stories have emerged over the past few years about the chaos behind the scenes at the White House, but with the presidency on the line in November, it looks like the Commander-In-Chief is now making big moves to prove he’s still in control: President Trump has forced his son Eric to get a gigantic hoop earring so that he can tell him apart from Don, Jr.

Hopefully this will eliminate some confusion going forward!

According to sources in the administration, for the past four years, President Trump has been using the names “Eric” and “Don, Jr.” interchangeably and calling pretty much anybody that looks younger than him by the names of one of his sons. After growing increasingly frustrated with the ongoing confusion, sources say that last night the president finally got fed up and took control of the situation, ordering the Secret Service to storm into Eric’s bedroom, pin him to the ground, pierce his left ear, and outfit him with a huge hoop earring so that he can be easily distinguished from his older brother.

“Now it is simple. Ermann is the one with the earring like a pirate and Smaller Donald is the one whose ears are nude,” President Trump told a group of reporters at a White House press conference this morning. “When I see one of my sons, I will simply command them to shake their head back and forth, and if I hear the jingle jangle of a beautiful earring, then I will know that it is Ermann and I will spit in his eye, and if I hear nothing, then I will know it is Small Donald and I will spit in his lunch.”

“I also have a son named Barron, but I always know who he is because he is the one that kicks me in my groin whenever he sees me,” President Trump added. “If the son with an earring ever kicked me in the groin, I would not know if it was Ermann or Baron.”

The president went on to say that he felt it was crucial to find a reliable way to tell apart his children because twice each week he likes to have Don, Jr. come to the Oval Office so he can practice the Heimlich maneuver on him as a means of cardiovascular exercise, yet sometimes he gets confused and invites Eric instead. He explained that this is problematic because Don, Jr. is “250 pounds heavier than Eric,” so he gets a worse workout if he accidentally practices the Heimlich maneuver on Eric instead of Don, Jr., and it is therefore absolutely critical that he summons the correct son. He then expressed optimism that this will no longer be an issue moving forward, as he informed Eric that if he ever removes his big hoop earring, he will be immediately sent to Guantanamo Bay, giving him strong incentive to continue wearing the earring so that his father never mistakes him for his “250 pound heavier” brother again.

Sounds like the president is finally starting to act like the decisive leader he always promised to be! Here’s hoping that Eric Trump’s new hoop earring will help eliminate a lot of the confusion from the president’s daily life, allowing him to spend less time on figuring out who his children are and more time governing the country.