Goddammit, He’s Literally The Last Person Who Deserves This: A Caravan Of Royal Courtiers From Faraway Just Arrived In DC To Inform Mitch McConnell That He’s Been A Prince All Along 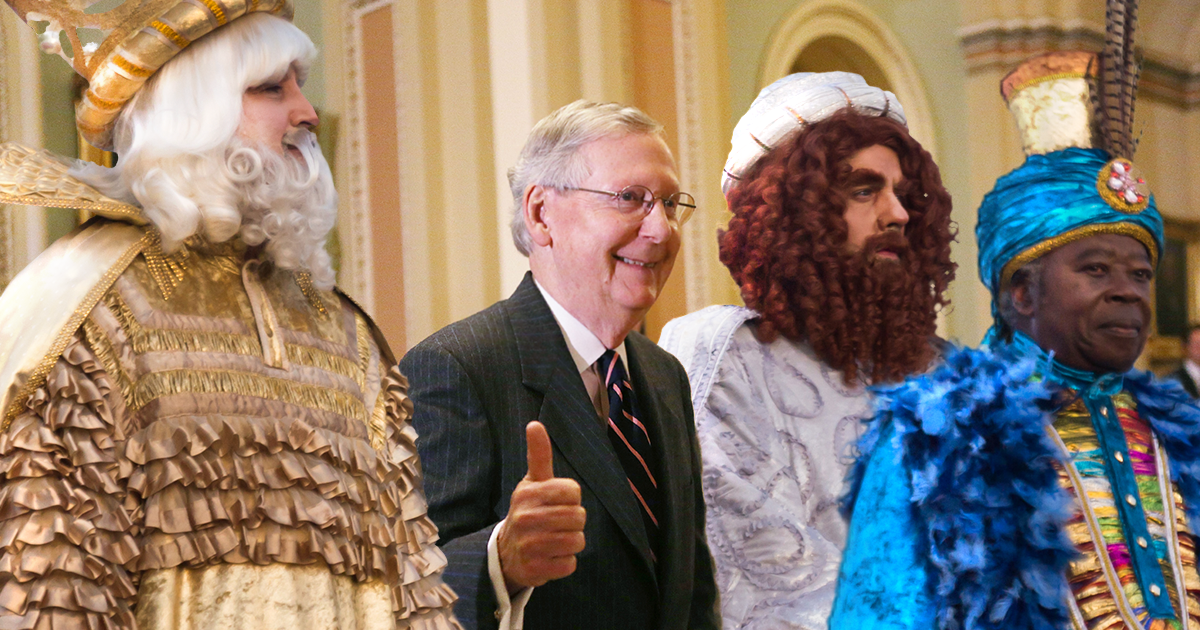 If you were hoping that one of the most malicious bastards in American politics would see some kind of comeuppance for the lasting harm he’s done to our country, we’re sorry to have to tell you that things are only getting better for him: A caravan of royal courtiers from faraway just arrived in Washington DC to inform Mitch McConnell that he’s been a prince all along.

Goddammit. This is not how karma is supposed to work.

The whole bullshit affair began earlier this afternoon when a group of about a dozen men clad in sumptuous robes of fine cloth approached the Kentucky senator outside the Capitol to ask if his parents had been Addison and Julia McConnell of Athens, Alabama. McConnell answered affirmatively, prompting the oldest of the men to ask if he perhaps had a distinctive crescent-shaped birthmark just below his left collarbone, which McConnell said that he did. After excitedly conferring among themselves for a moment, the whole group then knelt down in solemn obeisance and announced that there could be no mistaking that he was the long-lost prince of their distant kingdom, which honestly would have been a beautiful moment if it weren’t happening to such an irredeemable piece of shit.

As they crowned him with a splendid emerald diadem and bestowed upon him an extremely badass heirloom sword, the courtiers went on to explain that McConnell had been spirited away as an infant to protect him during a period of great strife within the realm, and was left in the care of a childless American couple who vowed to keep his princely lineage a secret for as long as they lived. They then hoisted him aloft on a gleaming gold palanquin to be paraded around the Capitol, which means that in addition to already being one of the richest members of the senate anyway, McConnell now gets to be carried everywhere for the rest of his life, and you can see on his smug fucking face how much the asshole loves it.

It’s downright agonizing to see McConnell happily tapping his feet while his personal bard—which is a thing he has now!—sings a song about how their handsome and valiant prince has at last been returned to them. Here’s a guy who’s done everything in his power to stop Americans from having healthcare, and he’s watching a bunch of lithe, beautiful dancers perform in his honor while a courtier tells him that every single one of the dancers has asked for McConnell to make them one of his wives.

Granted, it’s not like anyone could have known that McConnell would grow up to be an obstructionist asshole who has done more to immiserate the American people than almost anyone else living, but it’s still a real slap in the face to hear these guys tell him that his palace grounds include an aviary full of exotic birds and a personal orange grove in one of the courtyards. This weasley old prick ratfucked Obama out of an entire Supreme Court Justice, and now a huge, extremely cool-looking warrior guy is telling him that he’s his sworn sword and protector and exists only to serve his will. The courtiers even went so far as to yell at Ed Markey for passing by without showing appropriate reverence to their prince, which is pretty fucked up considering that he’s an objectively better public servant and human being in general.

Man, everything about this absolutely sucks. It just goes to show that there’s simply no goddamn justice in the world in terms of who gets to discover that they’ve always been a secret prince.