Going Rogue: Jeff Sessions Is Continuing To Pore Over A Corkboard Of Interconnected Pictures Of Himself Even After Being Taken Off The Case 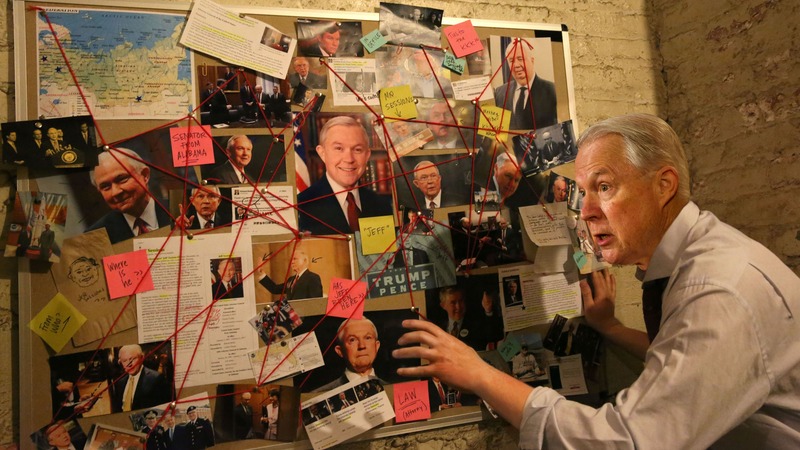 The investigation into Jeff Sessions’ ties with Russia is only a few days old, but it has already created a typhoon of accusations and uncertainty. While it’s hard to find any impartial person in a highly partisan Washington, one man is doing whatever it takes to get to the truth, despite being barred from the official investigation: After being permanently recused from the case against the attorney general, Attorney General Jeff Sessions went rogue and refused to stand down, retreating to his basement at night to construct a corkboard of interconnected pictures of his face.

Wow. Just because his bosses in Washington seem intent on covering the story up doesn’t mean this lone wolf with nothing to lose is going to let it happen.

Despite repeated warnings from top Republicans that if they catch him working on the Jeff Sessions file they will “have his ass on desk duty so fast his goddamn head will spin,” Jeff Sessions left the office yesterday and returned home hell-bent on cracking the case. After placing a large photo of himself at the center of a five-by-five corkboard, the attorney general began to pore over hundreds of newspapers, ripping out articles about himself and connecting them in complicated patterns using yarn and pushpins.

Wow. If the corrupt, broken government wasn’t going to investigate Jeff Sessions, then Jeff Sessions was no doubt going to have to take matters into his own hands in the name of justice. For the next 12 hours, the attorney general repeatedly racked his brain while obsessing over the board, adding photos of himself from the 1980s, circling photos of Russian Ambassador Sergey Kislyak, and crossing out photos of Senator Al Franken. During one breakthrough moment, Sessions identified a picture he had taken of a car that is often suspiciously parked outside Jeff Sessions’ house as his own car.

“Oh, sweet Jesus. This goes right to the top,” Sessions said to himself as his eyes darted around the corkboard, his tie slack around his neck and shirt covered in sweat stains. “How could I have been so stupid!” he added breathlessly as he switched a piece of yarn that connected a picture of himself to an index card with “Senator from Alabama” scrawled on it to an index card that read “U.S. Attorney General.”

At around 6 a.m., however, Sessions’ reportedly hit a major roadblock, and he, in a moment of unbridled passion, ripped photos off of his board, knocked over the dozen half-drank styrofoam cups of coffee on his table, and sent a full ashtray chock full of smoldering cigarettes crashing to the ground. After splashing his face with cold water and exhaling deeply, the attorney general was able to compose himself, at which point he picked up the large picture of himself, nailed it to the wall with the tip of his knife, and whispered, “You can’t hide, human scum. I’ll pull you out of whatever gutter you’re hiding in, you son of a bitch.”

Although Sessions still did not have the answers he was looking for by the time the sun came up in the morning, he simply locked his basement and went back to work at the Department of Justice, vowing to return as soon as he could, without letting any of his colleagues know about his off-the-books investigation. Should more allegations pop up in the future, at least it’s good to know that the attorney general will be on the case, come hell or high water!