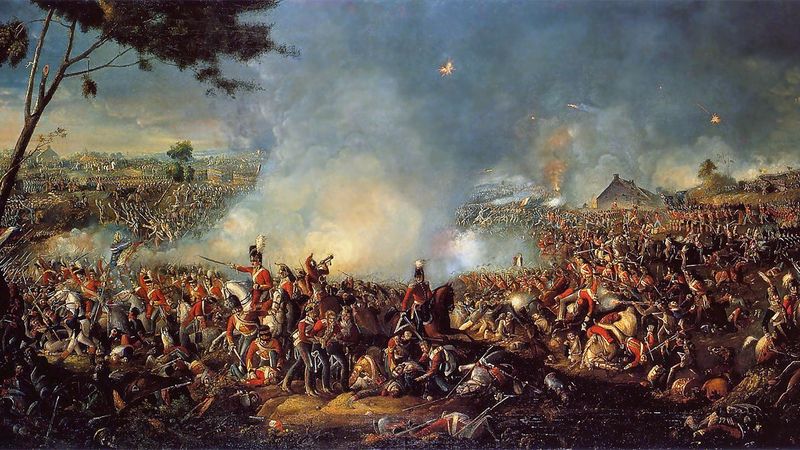 Life can change in an instant. One minute everything is fine, and the next you’re face-to-face with life-or-death decisions. Not long ago, I found myself in a sudden high-pressure situation, and, with only limited resources, managed to get out alive. I survived the Battle of Waterloo, and all I had with me was a smartphone and two large chocolate chip cookies.

That was all I had with me. Not the clothes on my back, and only some of my skin. I remember it began when I was just tearing around in my Pontiac GTO in these gorgeous fields in central Belgium, really kicking up a lot of dirt just doing some donuts, when all of a sudden I realize that the Battle of Waterloo is happening—and I’m in the middle of it.

It’s one of those worst-case scenarios that you never think will happen to you. I took a deep breath, and out of nowhere, a cannonball hits the side, and the car flips and dies. I realized that I was just sitting there in my busted Pontiac, right in the middle of the Battle of Waterloo. I didn’t know quite what to do, but I knew I had to keep calm.

As I got out of my bombed-out Pontiac, I realized I was face-to-face with Napoleon himself, because he was holding a trumpet that looked like it might belong to Napoleon. He looked me up and down, and said, “Someone cover this child in lava, but save his hair, which I shall use as a wig for my gayest son, though they are all quite gay.” One of my three hearts sank like a stone. I knew I was in serious trouble.

Now, I’m totally freaking out. Napoleon seems pretty irate, and he’s not about to let me go with a heartfelt apology, so I jam my meaty hand into my pocket and pull out a chocolate chip cookie that I’d been saving just in case I ran into a pretty girl and wanted to impress her. But I figured if there was a time to use the pretty girl cookie, the time was now.

What happened next changed my life.

…I realized I was face-to-face with Napoleon himself, because he was holding a trumpet that looked like it might belong to Napoleon.

Napoleon ate the cookie right out of my hand like an otter, and he immediately looks bad. Like, real bad. Then the dude just keels over, dead as a doornail. I’m freaking out, because I just killed a very diabetic Napoleon, and now his soldiers are gonna cut my guts out with swords, but one of them turns to me and says, “You killed Napoleon! We’ve been trying to do that forever, because he married all of our sisters and we thought that was disrespectful.”

Right then, I think I’m out of the woods, but things are about to get worse. I have the French on my side, but I look over to my left and see the Prussian 16th Brigade barreling down on our position in Plancenoit, and I realize I have to act fast or I’m going to die. I was also pretty sure my elementary school bully Chris Lister was in that Prussian 16th, so I knew that if I got captured, it would be more than a little awkward. So, at this point, I don’t even try to rescue my copy of Dude Ranch that was in that Pontiac, and if you know me, you know that’s a big deal, leaving that behind.

As I run, I reach into my pocket and feel for my iPhone 5S. Of course, I have no service. But I realize that I have the last YouTube video I watched still open. It’s an hour-long video of mating calls of the California condor. I started playing the mating call to comfort myself as I dodged the spears being thrown by the Prussian 16th, when all of a sudden, I realize that I’m flying through the air. A pack of sexually aroused California condors had been flying over the battlefield, and they picked me up with their talons.

Finally out of the violent fracas of war, I am free to absorb the great views of the marching armies and the intense helicopter battles just above me. I fish out the other chocolate chip cookie in my pocket and feed it to one of the condors, and in exchange, they send a small flock to go airlift my Pontiac out of the field safely over to the United States. The helpful birds drop me and my loyal Pontiac on top of the Empire State Building, where I live with my wife, Jimmy Carter.

What did I learn from my experience? I learned that people are capable of incredible things when put in dire situations, and that the sun is God’s golden basketball. It’s possible, even when you’re in the middle of one of the most decisive battles in 19th-century military history, for you to accomplish anything if you have your smartphone, baked goods, and a decent head on your shoulders.