Not Sure How This Happened, But Okay: This Man Rang A Little Bell For 25 Seconds On A Livestream And He Raised $650 Million For COVID Relief 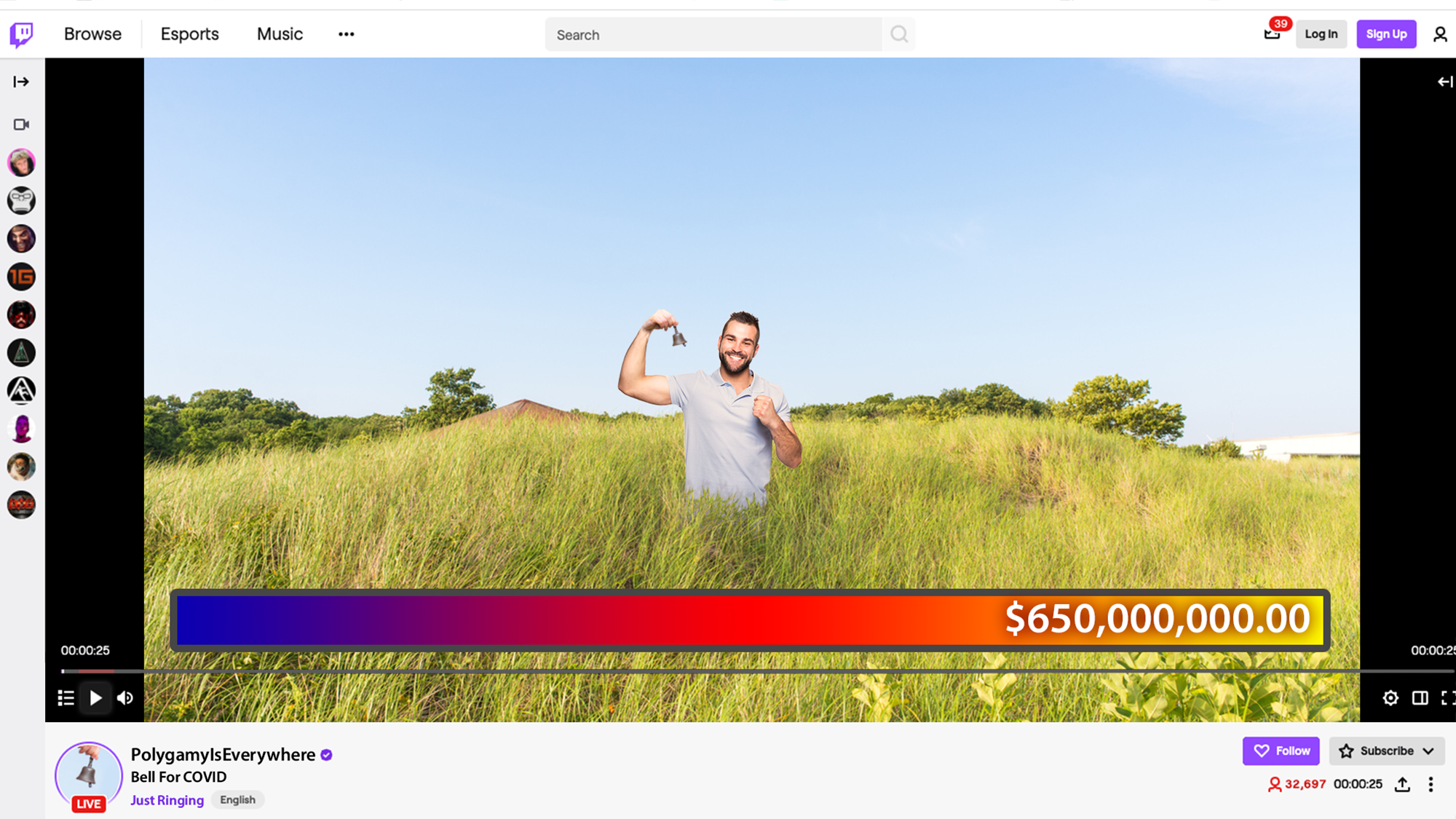 Since the COVID-19 pandemic began, many people have been stepping up to raise money for fellow Americans who are suffering from illness or financial difficulties, but one individual’s effort to help those affected by the virus has been particularly stunning: This man rang a little bell for 25 seconds on a livestream and he raised $650 million for COVID relief.

Huh…not quite sure what the story is here, but you can’t argue with those results!

At 4:30 a.m. yesterday morning, an anonymous man with the Twitch handle “PolygamyIsEverywhere” began live-streaming himself standing in the middle of a field ringing a tiny bell over his head while he stared silently into his webcam. The bell went ding-dong-ding-dong as the man waved it around in the air. For the next 25 seconds, donations to the livestream came pouring in as the man jingled the bell all around while periodically stamping his leg like a horse doing math.

Within 3 seconds, the livestream had raised $25 million in donations for coronavirus relief, and one second later that number had shot up to $80 million. Although there was absolutely no publicity for the event and no description of what was going on, hundreds of thousands of people from all over the world flooded the video of the man ringing the bell to donate money, usually leaving comments like, “I like the bell” and “The bell comes from indoors :).”

Pretty cool, we guess? We’re honestly not sure how this guy pulled this off, but there’s really no point in complaining.

Even major celebrities and ultra-rich industry moguls started getting into the giving spirit. After 9 seconds of bell ringing, Bill Gates donated $200 million with the note, “I want the bell to come to life and punch me in the stomach.” Two seconds later, world-renowned entrepreneur Mark Cuban donated $12 million with the note, “I need to take my brain out of my skull and replace it with this bell (this would kill me).” Even “The Queen Of Mean” herself, Martha Stewart, donated $60 with the note, “Martha love Bell. Bell grows legs to CHASE Martha through the labyrinth <3.”

After 25 seconds of ringing the bell, PolygamyIsEverywhere and his little bell had raised $650 million to be distributed to struggling small businesses and underfunded hospitals across the United States. When the 25 seconds had elapsed, PolygamyIsEverywhere stopped ringing his bell, took his shoes off, and walked away into the distance. The identity of that heroic man and the name of his nice little bell still remain unknown.

This is an amazing story that is as confusing as it is heartwarming! It seems like if more people would stand in a field and ring a little bell, the world would be a better place, though we’re not sure why. Kudos to PolygamyIsEverywhere for somehow managing to raise a massive fortune in donations just for ringing a tiny little bell!