Pursuing New Passions: BTS Has Rebranded As The ‘Sons Of Orion Explorers Brigade’ After Finding A Telescope In A Dumpster And Getting Super Into Space 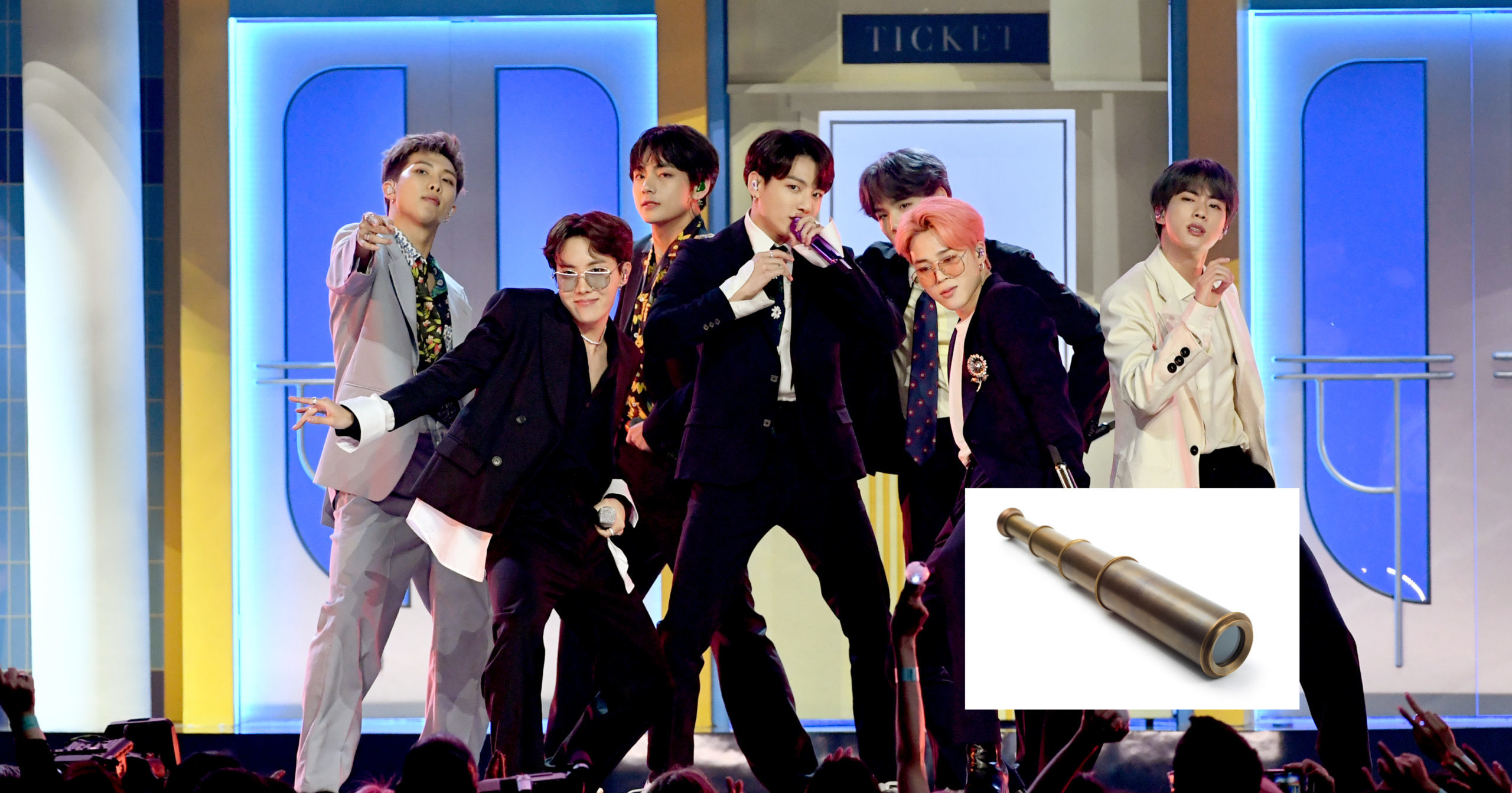 One of the world’s biggest pop groups just made a massive career shift that’s sure to send shockwaves through the music world: BTS has rebranded as the “Sons Of Orion Explorers Brigade” after finding a telescope in a dumpster and getting super into space!

Wow! While this’ll be a tough pill for fans to swallow, you can’t blame BTS for pursuing their passion.

The wildly popular boy group made the shocking announcement via a video posted on their social media accounts earlier this morning, in which all seven members of the now-former K-pop act—Jin, Suga, RM, J-Hope, Jimin, V, and Jungkook—explained the decision while sitting in a planetarium with the “Star Trek” theme song playing quietly in the background.

“Hello to all the fans of BTS in the world, we have big news to tell you all, and it is that J-Hope was digging around in the garbage yesterday and found a telescope, and now the only thing we like is looking at the stars and planets,” RM says at the start of the video, after which J-Hope gives a thumbs up and waves the telescope at the camera.

“I was looking for jewels in the trash, but instead I found this telescope, and it is a more valuable treasure than any jewel, because it shows to us the beauty of outer space,” J-Hope explains.

“We will not be making any more music, because now we are named the Sons Of Orion Explorers Brigade, and what we like to do is discover new asteroids and make charts and graphs about the orbit of Mercury,” says Jimin.

“We are no longer BTS. Our new name is now Sons Of Orion Explorers Brigade, and we have dedicated our lives to astronomy,” says V.

“Music is trivial when compared to the majesty of outer space, which is why we will not be making songs anymore,” Jin adds. “You can still call us BTS if you want, but from now on BTS stands for ‘Behold! The Stars!’ and nothing else.”

The video concludes with Jungkook shouting, “I don’t like music, I like space!” followed by his band members nodding in agreement and saying things like, “Saturn is beautiful” and “I love to observe the moon.”

Damn. It looks like BTS is officially no more.

In a follow-up post on social media, the Sons Of Orion Explorers Brigade announced some huge upcoming changes that will be sure to leave fans of the band once known as BTS reeling. The group will be removing all music recorded under the BTS name from all streaming platforms, including Spotify and Apple Music, and will be replacing their songs with a single audio track of the seven members of the Songs Of Orion Explorers Brigade reciting the names of all the planets in unison. The Sons Of Orion will also cancel all upcoming concerts so that they have more time for stargazing in the evenings with their telescope. Additionally, Jungkook has changed his name to “Galileo’s Brother” and Jin has changed his name to “The Fabulous Mr. Black Hole.”

The Sons Of Orion Explorers Brigade went on to say that their new goal as a group is to “spread the love of telescopes to the youth of the world” and to “make people agree that Jupiter is huge.” While they will no longer be making public appearances so that they can dedicate more time to examining the heavens through their dumpster telescope, the former pop superstars will be occasionally tweeting out star charts documenting the movements of celestial bodies such as comets and meteors, which they are encouraging their fans to share on Twitter with the hashtag “#SpaceIsCoolerThanMusic”.

This is truly the end of an era for pop music, but we’re so glad the Sons Of Orion Explorers Brigade will now be able to spend their time drinking in the majesty of the cosmos! It just goes to show that when you go looking for jewels in a dumpster, you just might end up finding a telescope instead and discovering a newfound love of outer space. We wish the Sons Of Orion Explorers Brigade all the luck in the world as they begin this new chapter of their lives—the sky is literally the limit!