Sort Of Heartwarming: This Father Was Pushing His Paralyzed Son In A Marathon But Ditched Him When He Realized He Had A Shot At Winning 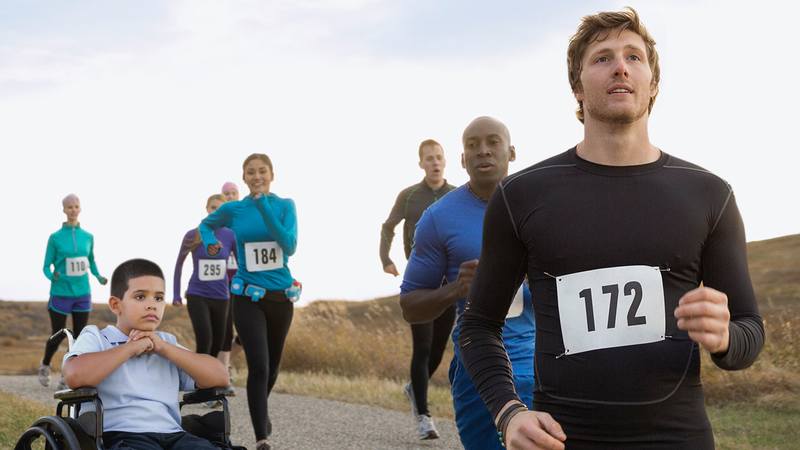 Here’s a story that’s guaranteed to kind of warm your heart.

Christopher Dabney has always done whatever he could to let his son, Zack, who has paraplegia, know that anything is possible. But yesterday, Dabney decided to do something for Zack that was almost pretty touching: He pushed his son most of the way through a marathon but then ditched him when he realized he had a shot at winning.

Christopher trained for the Pittsfield marathon for nearly a year, never once going on a conditioning run without pushing his 15-year-old son, who lost motor function of his legs due to a genetic disease, right with him. As beautiful as that father-son bonding time was, it was pretty much chucked out the window around mile 16 of the actual race, when Christopher realized he was pacing six-and-a-half-minute mile splits and Zack and his wheelchair were just slowing him down from what could be a top-10 finish.

After it registered that he stood a decent chance of winning, Christopher immediately jettisoned his son’s wheelchair to the side, causing it to spin out of control and launch Zack onto the ground near a Gatorade table. Some runners behind the initial collision even added to the pileup by tripping over the wheelchair that was lying in the middle of the track.

Without the burden of pushing his son and his wheelchair, Christopher was able to pick up his pace, all of those heartwarming training runs spending quality time with Zack essentially acting as resistance training. As race officials helped get his son back into his toppled wheelchair, Christopher put in some personal-best mile splits and finished in third. He was so excited to be awarded a bronze medal that he drove halfway home before realizing he had to go back and pick up Zack.

Well, this truly would have been a powerful story of a father’s love for his son had it just stopped with the training runs. We suppose Christopher deserves some measure of credit for bonding with his son through his running passion, but next time, he should really shoot for starting and finishing the race with Zack, even if it means a slower time.