The Future Of Food Is Here 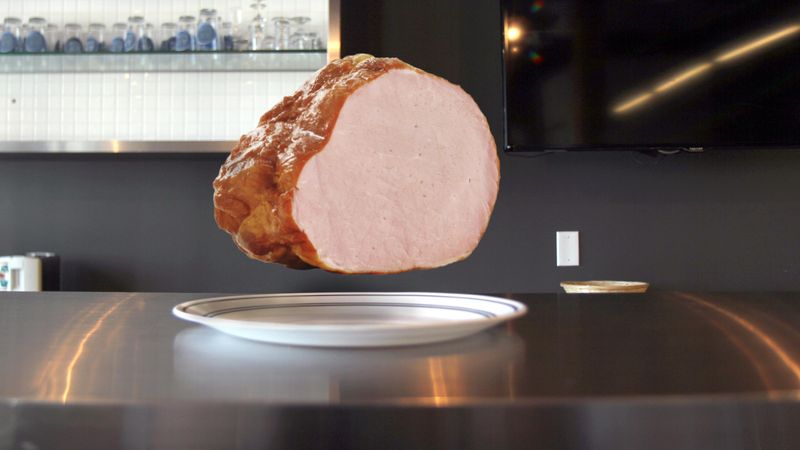 The world is rapidly changing, and the food industry has been struggling to keep pace. With the effects of global population growth, shifting dietary needs, and threats to our current means of agriculture, it’s inevitable that the coming decades will radically reshape the way we eat. That’s exactly why Swinely Inc.’s latest innovation in food is blowing people’s minds. Introducing: Hover Ham.

In development since late last year, Hover Ham is swiftly establishing itself as a bold successor to modern sustenance. The honey-cured meat product, currently in the final stages of FDA approval, is equipped with groundbreaking anti-gravity technology that allows it to hover motionlessly above your dinner plate like something out of a space-age utopia. Slated for a 2015 release to the general public, the product could soon completely revolutionize our mealtimes.

“Compared to conventional proteins, levitation like this is completely unheard of,” said Julian Wier, CEO of Swinely. “We’re confident that once we reach the consumer market, people will be enjoying Hover Hams in every kitchen in America, and soon after that, the world.”

The best part is, you can choose to either slice pieces of the Hover Ham off as you go or simply lean in and bite into it like an apple. The ham is nearly identical in taste and nutritional value to traditional ham, but it floats. Amazing!

So far, Wier says, technology experts are working on fixing a few kinks in Hover Ham—namely a glitch that causes the slab of meat to spontaneously float away from dinner tables—but beyond that, feedback has otherwise been universally positive.

“My hope is that, eventually, people won’t even remember a time when they ate ham that wasn’t hovering,” said Wier. “We anticipate that the name Hover Ham will soon be synonymous with flavor, quality, and innovation.”

At $13 per pound, Hover Ham might initially prove to be prohibitively expensive for some. But following the product’s launch, plans are already in the works to offer discount hams at more affordable rates. We know we can’t wait to sink our teeth into some hovering deli meat!