Tough But Fair: This Teacher Confiscated A School Shooter’s AR-15 For The Rest Of The Day 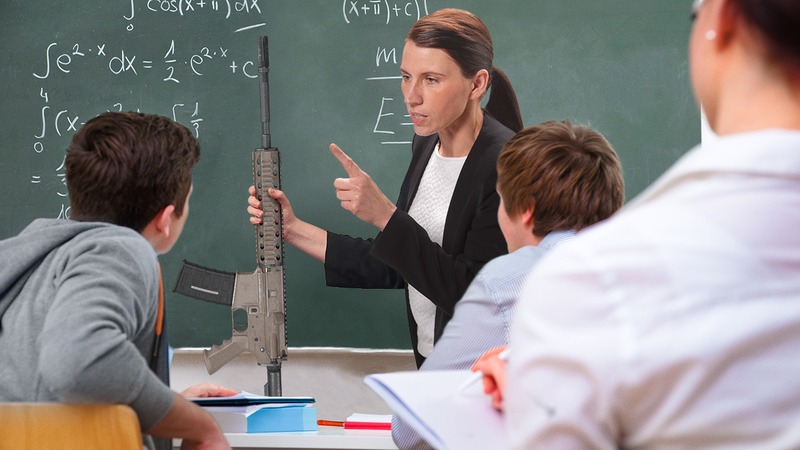 Sometimes being a teacher means doling out some discipline to keep your classroom under control, and biology teacher Arlene Jeffries of Plainview High in Colorado just proved that she’s one of those tough but fair teachers who’s not afraid to get strict with students who disrupt her class. When a school shooter burst into her classroom and began attacking her students, she confiscated his AR-15 until the end of day.

Harsh but totally justified. He’ll think twice about bringing his assault rifle to school after this punishment.

As soon as the gunman burst through the door of her classroom and began opening fire, Mrs. Jeffries called him out by saying, “Trevor, is that an AR-15 in your hands?” and reminded him that she had explicitly forbidden massacring fellow students on the class syllabus. The no-nonsense teacher then had the gunman put his semi-automatic rifle in her desk drawer and told him he couldn’t retrieve it until after the final-period bell.

Talk about laying down the law. Biology is only Trevor’s second-period class, so he’ll have to go all day without being able to use his AR-15.

Students say that Mrs. Jeffries is usually a pretty chill teacher, so you could tell how upset she was to have her time and the time of her entire class wasted by a deranged murderer. She told the chastened spree killer that if he wants to commit a mass shooting at a mall or an airport, that’s his business, but during school hours she simply couldn’t allow this kind of behavior.

It must have been super embarrassing for Trevor, because after she confiscated his gun, she then made him go up to the blackboard and draw a diagram of cellular mitosis. When he mixed up the labels for the chromosomes and the nuclear membrane, the teacher ribbed him by saying he should have spent more time studying and less time at the gun store filling up his duffel bag with ammunition.

Savage. This is why you don’t want to get caught shooting students in Mrs. J’s class while she’s trying to teach biology. It’s a teacher’s job to stop any psychopathic attackers who disrupt their classrooms with rapid-fire weaponry and get the lesson plan back on track, but unfortunately some educators have been slacking off and letting gunmen get away with their tomfoolery and distracting behavior. As the gun control debate rages on, more schools could stand to learn a thing or two from Mrs. Jeffries’ strict but reasonable approach.