A Beautiful Cause: Thom Yorke, Ruben Studdard, And Mason Ramsey Have Recorded A New Version Of ‘We Are The World’ To Raise Money To Support Vagina Dentata Research 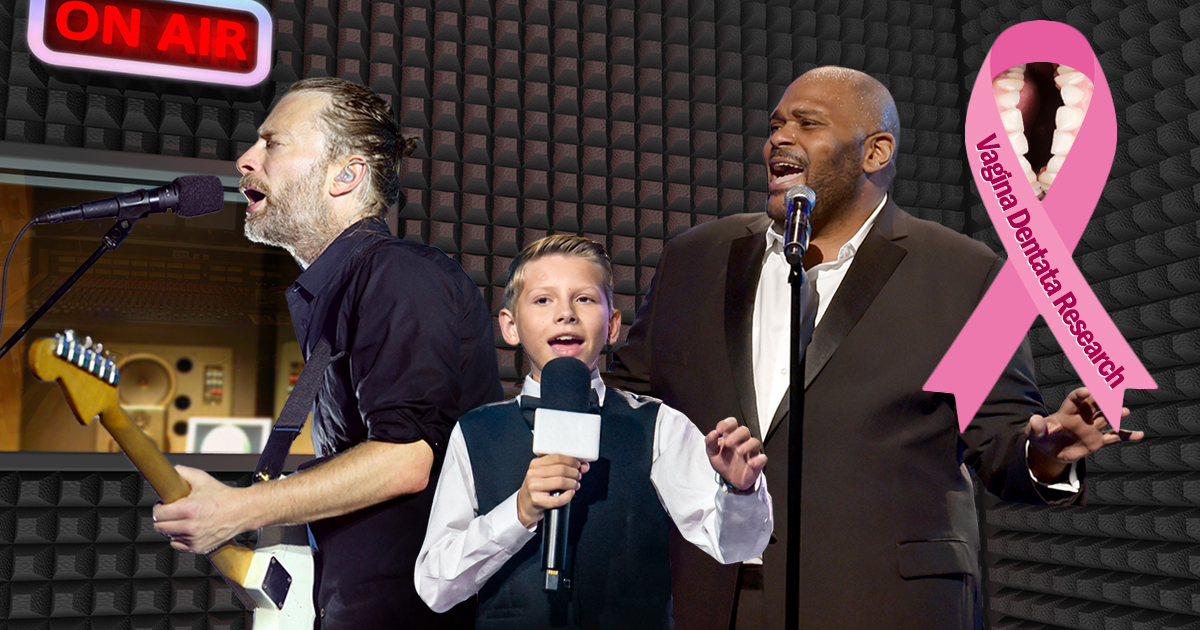 If you were hoping to read some uplifting news today, you’re in luck, because three beloved musicians are joining forces for a beautiful cause: Thom Yorke, Ruben Studdard, and Mason Ramsey have recorded a new version of “We Are The World” to raise money to support vagina dentata research.

Absolutely beautiful. If anyone can change the world through music, it’s these three unbelievably generous artists!

Officially released today, all proceeds from Yorke, Studdard, and Ramsey’s rendition of “We Are The World” will be donated to medical schools and health science institutes performing research on causes, treatments, and cures for vagina dentata, a condition that makes a person’s vagina have teeth in it. Taking inspiration from the pop supergroup who sang the original “We Are The World” in 1985, which raised over $60 million for humanitarian relief in Africa, American Idol runner-up Ruben Studdard spearheaded this 2022 recording of the charity single after being told about vagina dentata from a nephew, and knowing he had to do something about it.

Studdard immediately leapt into action, personally contacting the Radiohead frontman and the child who went viral yodeling in a Wal-Mart to explain what vagina dentata is and how little is known about it, or if anyone in the world even has it. According to Studdard, Yorke and Ramsey instantly agreed to record the charity song with him, with all three artists pledging to match publicly raised funds for vagina dentata up to $15,000.

As for the track itself, Yorke, Studdard, and Ramsey’s “We Are The World” cover opens with sweeping synths set to steel drums and a choir of harmonizing children, as Yorke delivers a heart-wrenching monologue about the suffering caused by toothy vaginas.

“When your children ask what you did in the war against vagina dentata, what will you be able to tell them?” Yorke asks over the song’s uplifting chord progression. “You may be asking, ‘Why should I care about vagina dentata? It doesn’t affect me.’ But it does. Vagina dentata affects us all. Consider the vaginas in your life: your daughter’s. Your sister’s. Your aunt’s. This song goes out to them, and to all the people in the world whose penises have been severed by a rude chomp from a vagina with molars. No matter what race, class, or religion you are, as human beings, we can ALL agree on this: a vagina with a tooth in it is one vagina with a tooth in it too many. Vaginas should be nothing but gums. For what it’s worth, I think my grandmother had vagina dentata—sing it! We are the world! We are the children! We are the ones who make a brighter day, so let’s start giving!”

“It’s tragic that in the year 2022, there still remains virtually no public data about vagina dentata and who it is affecting, if anyone, which is exactly why Thom Yorke, Ruben Studdard, and myself are bringing awareness to vaginas with teeth through the power of music,” explained Mason Ramsey in a press statement released alongside the charity single. “If I ever meet a fan who suffers from vagina dentata, I want to be able to look them in the eye and say, ‘Mason Ramsey has your back.’ With your help, we can be the generation that ends vagina dentata forever.”

To support the charity record, Yorke, Studdard, and Ramsey will perform at a telethon held at Madison Square Garden later this month, where they’ve put out a public call inviting anyone who has vagina dentata to join them on stage in solidarity. With the combined proceeds from the telethon, sales of the single, and merch from the event—such as Vagina Dentata Awareness ribbons and t-shirts featuring a gravestone engraved with “Here Lies ‘Vagina Dentata’ 300 B.C.-2022, Loved By No One”—Yorke, Studdard, and Ramsey say that they aim to raise over $1 billion for research into toothed vaginas.

What a powerful example these musicians are setting. This is how you use your platform for good!

This is such a heartwarming collaboration. Anyone who thought these A-list musicians weren’t humble enough to give back has just been proven wrong a hundred times over. If you don’t give Yorke, Studdard, and Ramsey’s “We Are The World” a few plays today, you simply don’t have a heart!