Burying The Hatchet: Noel And Liam Gallagher Have Set Aside Their Differences To Help Lower A Pervert Into A Pit Toilet 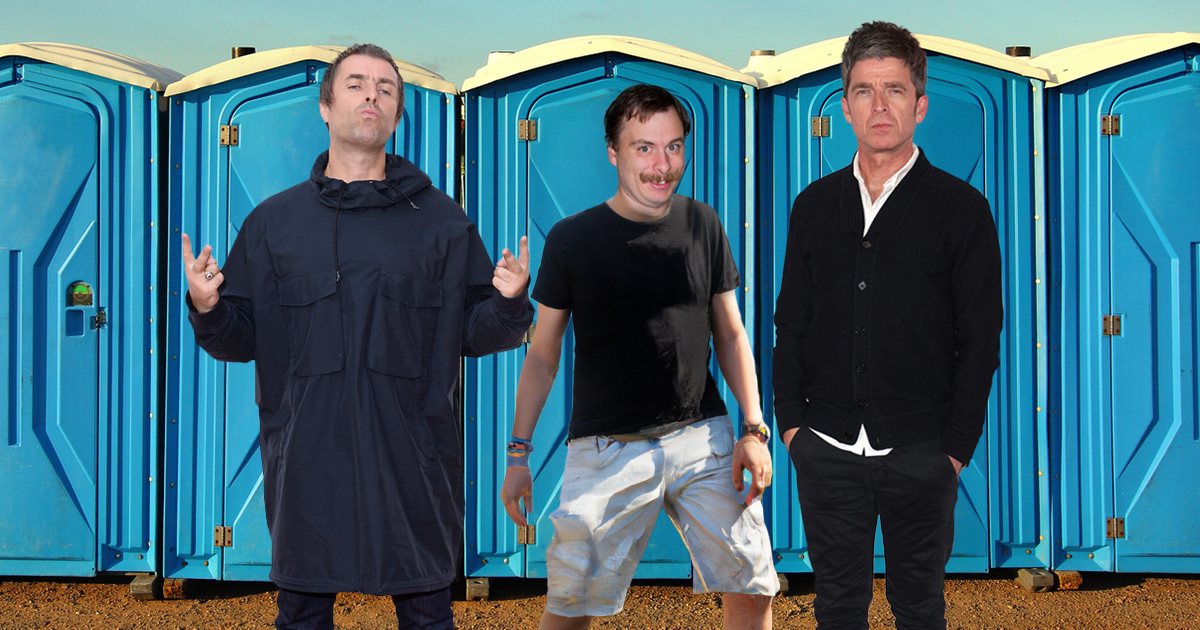 Few celebrity rivalries are as legendary as the feud between Oasis frontman Liam Gallagher and his brother, guitarist Noel Gallagher, who seemingly hurl bitter, hateful insults at each other every chance they get. But after over 10 years of not speaking, there is finally a sign their relationship may be on the mend: Noel and Liam Gallagher recently set aside their differences to help lower a pervert into a pit toilet.

Holy. Balls. Do we hear the first sounds of a new Oasis album in the works?

The momentous event between the “Wonderwall” performers happened at a campground outside of Manchester where the brothers were coincidentally both separately spending the weekend. Liam was first to spot the pervert struggling to lower himself into the campground’s pit toilet but clearly lacking the strength to safely do so without breaking a leg under the weight of the wetsuit, snorkel, camera equipment, and week’s supply of food and water the disgusting sex freak was carrying. Liam approached the man, whose penis was already erect at the prospect of spending days being used as a human toilet and protruding through the masturbation access hole he’d cut into his diving suit, and asked if he needed help. The man gave a muffled affirmative reply from under his diving mask, and Liam started to help the sex freak climb down into the filth.

Liam began attempting to shove the pervert down through the toilet’s seat and lower him into the sewage below, but quickly realized there was no way he could do it alone. In a panic, he shouted outside the pit toilet for help. Suddenly, without saying a word, Noel Gallagher stepped through the half rotten pit toilet door and was shocked to see his brother for the first time in over a decade, dangling a pervert down into toilet’s foul muck. His initial reaction was to turn away and start heading back to his tent, but upon realizing there was no other way this pervert was going to get all the way inside the pit toilet without his help, he stayed to assist the brother he despised so deeply.

This is an absolutely amazing day for rock and roll! The reunion Oasis fans have been waiting for for years has finally happened!

Struggling against the toilet’s fumes, swarms of black flies, and their deep-seated hatred for one another, the brothers worked hand over hand to carefully lower the already-masturbating feces lover down into the dark, stinking hole. With two men on the job, they were able to easily send the pervert off on his sick adventure into the horrifying depths of the outhouse. After the pervert fully submerged under the human waste with a “glunk,” the two brothers stood in silence together in the cramped, reeking toilet, unable to look one another in the eye for what seemed like an eternity. Finally, Liam quietly muttered, “Well then,” to which Noel awkwardly replied, “Very good.” The brothers then took turns using the pit toilet’s hand sanitizer pump before Noel left without saying another word while Liam stayed behind to use the bathroom.

If you’re not openly weeping with joy right now, then you don’t deserve to listen to music!

It’s incredibly heartening to see the Gallagher brothers finally taking the first step towards healing their relationship, and of course we selfishly hope their experience helping the sex weirdo into the pit toilet has planted the seeds for some kind of Oasis reunion. Their mutual hatred for one another not only destroyed a band destined to be the next Beatles, it destroyed a brotherhood. We hope that coming together for the common cause of helping a toilet freak get off helps remind them that life is too short for frivolous squabbles and bitter rivalry, and that these two musical geniuses end up back in the studio together soon. May this wonderful moment be the first step on their long road to recovering their relationship, and possibly a followup album to 2008’s Dig Out Your Soul!