Culture Shock: Everything You Need To Know About ‘The Handmaid’s Tale’ 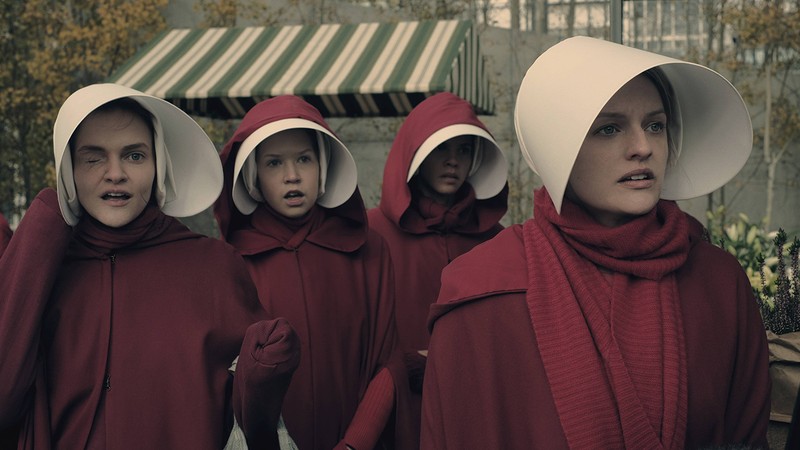 Based on Margaret Atwood’s bestselling book, the television adaptation of The Handmaid’s Tale swept the Emmys, winning eight awards, including best drama series. If you’ve never immersed yourself in the series, here’s everything you need to know to hold your own in conversation.

To capture the dystopian future portrayed in the story, producers destroyed the city of Toronto: Tasked with portraying life after a nuclear holocaust, the show’s designers created their set by setting off a large explosion in the center of Toronto and absolutely destroying all 250 square miles of it. Sure, it took them 300 tons of TNT, one mass evacuation, and a little Hollywood magic, but now it looks just as oppressive and dark as The Handmaid’s Tale’s colonies were meant to!

Author Margaret Atwood makes a cameo in the first episode as a kindly old lady who invites viewers to “join her on a journey to Gilead” before theatrically turning the page of a large book: The first episode of the new Hulu series actually begins inside a small, dimly lit cottage where a woman in a red hood sits in a big comfortable chair and looks up at the camera. Soon after, the music swells, she reveals her face, and introduces herself as “Miss Atwood.” “Miss Atwood” offers to read viewers an incredible story filled with magic and wonder about a beautiful woman named Offred. Finally, in one of the best cameo performances of all time, she opens the book dramatically and the show begins.

To put the show in present times, a few modern-day references were added, such as having characters talk about Coors Light’s frost-brewing process, the Coors Light NBA Halftime Show, or the 2017 Stadium Series presented by Coors Light: The original Handmaid’s Tale was written in 1985, so in order to bring it into 2017, writers included many scenes in which characters mention drinking Coors Light, craving Coors Light, or doing either of those things in the year 2017. In one particularly modern-feeling scene, Offred laments being stuck in Gilead, and wishes she could take a 2017 Coors Light Cruise or the Coors Light Train straight up to Canada.

The Handmaid’s Tale is the first show about a fundamentalist dystopia based on oppressing women to win best series since Frasier in 1997: It took 20 years, but The Handmaid’s Tale has finally dethroned Frasier, a show about living in dystopian Seattle and destroying the lives of women through a radio show.

Margaret Atwood got the idea for the novel when she formed a thermionic military dictatorship after overthrowing the U.S. government on a dare: In the early 1980s, Margaret Atwood was dared by her partner, novelist Graeme Gibson, to leave Canada and overthrow the U.S. government. She eventually took him up on it and ended up destroying fertility rates across the world, starting a civil war, and splitting what was left of the United States into five separate warring factions where military and theocracy rein. And thank goodness she did, because it created one of the most incredible books, and now television shows, of all time!