‘Ever Since I Could Remember, I’ve Always Enjoyed Screaming About What People Are Doing Right In Front Of Me’: 5 Questions With Dick Vitale 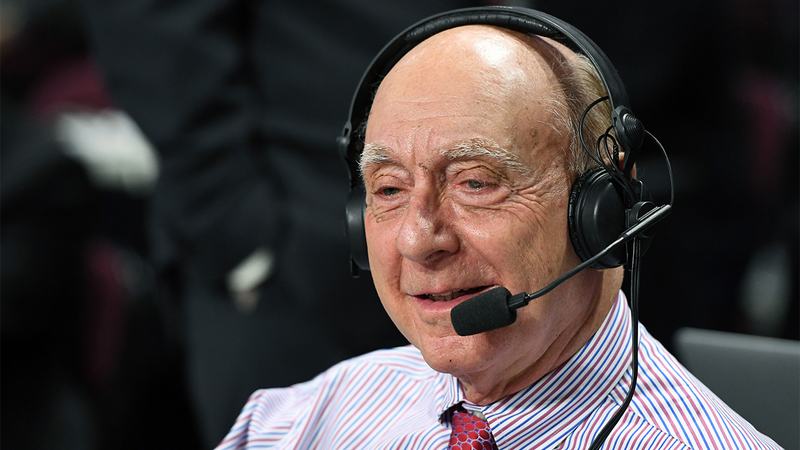 Bringing his trademark enthusiasm and glossary of catchphrases to every basketball game he announces, Dick Vitale has left his mark on sports broadcasting in a way that few others have. He’s been calling games since the late 1970s, and, in his words, he plans on continuing to do so until the day he dies. We sat down with Vitale to discuss his tremendous love for the sport and his storied career.

1. When did you first know that you had a talent for sportscasting?

Ever since I could remember, I’ve always enjoyed screaming about what people are doing right in front of me, so it was always natural.

2. What is it about working college games that you enjoy so much more than broadcasting professional games?

For me, the best thing is just how excited and enthusiastic the college players are about the game, which usually translates to them saying yes when I ask them to pick me up from under my armpits and help me dunk a basketball. In my experience, the old pros in the NBA have been around the block a few too many times to fall for my old sob story about how my legs don’t work anymore because I got rid of my cartilage, and how if they’d lift me up to dunk even just one time, I could die a happy man right there in their arms. But the college kids are so naïve that nine times out of 10, I’m already being hoisted into the sky like a toddler and soaring toward the hoop for a windmill jam before I’m even done asking the question. You can’t beat that.

3. You’re known for your catchphrases such as “This is awesome, baby” and “diaper dandy.” What are some of your other favorites?

“Cleaning up the hash browns”: That’s when a player drops his hash browns and is cleaning them up. “Forget his knees”: That’s when a player leaves his knees at home and can’t bend his legs. “I’d dunk my McNugget into that honey”—that’s something I say when I see excellent-quality honey; that’s not really a basketball one but it can be, I guess, if there’s good honey on the court. “Basically Bermudan”: That just means someone is Bermudan as far as I’m concerned, even if they technically aren’t Bermudan. And of course, “There’s sunken treasure somewhere inside that boy.” I don’t really know what that one means, but I say it a lot.

4. Out of all the games you’ve ever announced, what’s been your favorite?

Denver, 1995. One team all Michael Jordans, the other team all Shaqs. Ten basketballs, no hoops, one ostrich, and lots of caltrops scattered throughout the court. No refs, no rules, lots of biting, lots of pissing—just pure basketball greatness played by multiple versions of the top two players in the history of the game. I actually didn’t say a single word while calling that entire game besides “basketball,” which I said near-constantly.

5. How has basketball changed since you started calling games?

You have to understand that, since the 1970s, our knowledge of what exactly basketball is has grown by leaps and bounds. Much of what we now know to be fact—that the ball must pass through the rim to generate points, that the dribble constitutes the passage of the ball between the court and the player’s hand—was merely theoretical when I began my career. The day that we proved beyond a shadow of a doubt that there were in fact two basketball hoops, one at either end of the court, was one of the most exciting days of my life.