Hard To Watch: Joyce Carol Oates Is The Closest Thing To A Celebrity At This Sacramento Kings Game And She Won’t Stop Making Gross Little Concoctions With The Concession Stand Food 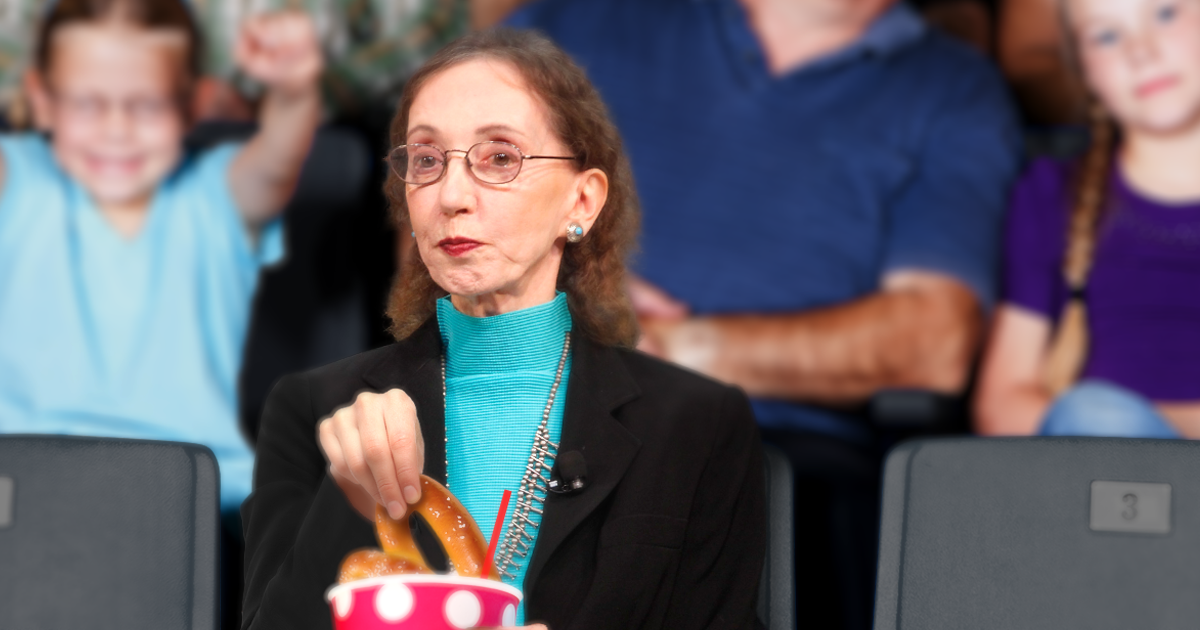 There’s nothing like seeing your favorite famous people courtside at an NBA game, showing off in style while enjoying some world-class basketball. Unfortunately, though, the stars aren’t necessarily out in droves tonight at the Golden 1 Center in Sacramento: Joyce Carol Oates is the closest thing to a celebrity at this Sacramento Kings game, and she won’t stop making gross little concoctions out of the concession stand food.

It was clear from the first quarter of tonight’s Sacramento Kings vs. Cleveland Cavaliers game that there was a woeful lack of A-list spectators in the building, as the Jumbotron operator has been focusing primarily on 84-year-old literary fiction writer Joyce Carol Oates, who is sitting in a coveted floor seat and has spent most of the game combining soft pretzels, sodas, burgers, and nachos into disgusting snack hybrids which she then wolfs down as if she has not eaten in months. Oates arrived at the game alone with a copy of her own novel Because It Is Bitter And Because It Is My Heart, and spent her first several minutes facing away from the court, reading her own book and laughing uproariously. But the next time the Jumbotron caught her, she had begun tearing up pieces of a bratwurst sausage and placing them in an Icee, which she then ate with a spoon, causing groans to erupt across the stadium. Since then, every time she has showed up on the big screen, the pile of food wrappers strewn around her seat has grown larger and larger as she continues to gorge on newly devised Frankenstein snacks, such as the beer-drenched, licorice-wrapped corn dog that she referred to as “meat-horn delight,” which she eagerly devoured while wholly ignoring the fast-paced, high-flying NBA action taking place not 20 feet from her.

As far as celebrity sightings at sporting events go, this one is definitely disappointing.

Other than a tweet from another fan mentioning that he spotted her in “dirty black pants” and “extremely wet hair,” there’s been virtually no social media chatter about Oates’ presence at the game, even after she wandered onto the court during halftime to pour most of a root beer float into her mouth and then chase it down with only the meat from a taco al pastor. During the third quarter, Oates was nearly knocked out of her chair by Domantas Sabonis as he chased an errant ball out of bounds, but the elderly author remained somehow unfazed as the Jumbotron caught her diligently creating tiny sandwiches out of tortilla chips and rapidly melting Dippin’ Dots while the seven-foot center crashed right at her feet. By this point, spectators were clamoring to see footage of anything else, but the camera operator seemed committed to doing justice to Oates’ stature in the literary world by featuring her prominently on the Jumbotron throughout the game.

Yeah, she’s definitely no Spike Lee or Jack Nicholson, as her presence courtside, if anything, seems to be making the game much less enjoyable for other fans. But, hey, at least she got to enjoy a bunch of snacks. Here’s hoping that someone much more famous shows up to the next game!