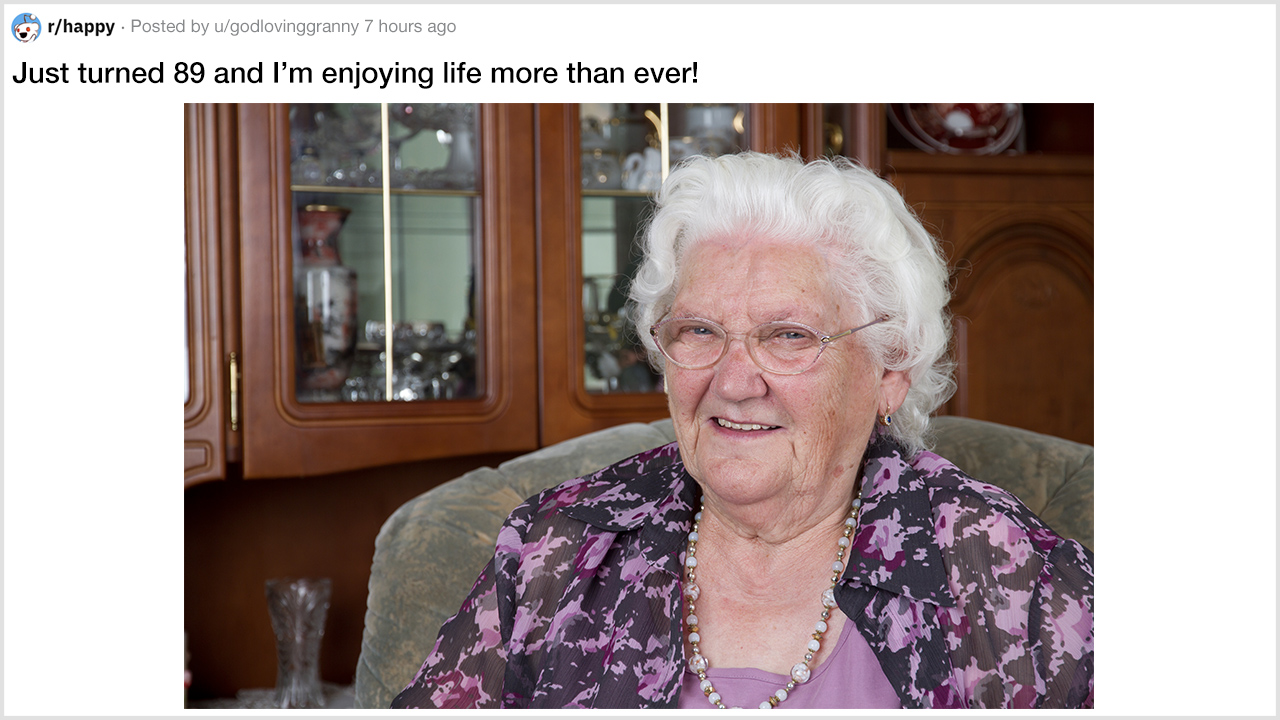 The internet can often be a cruel and vicious place, but of all the many heartless things people have done online, it’s hard to think of anything that’s as devastatingly sad as this: The smiling selfie Grandma uploaded to Reddit just became the most downvoted post in the site’s history.

Just awful. What is wrong with people?

Earlier today, in an effort to bond with her internet-savvy grandchildren, Grandma uploaded a selfie of herself smiling to the /r/Happy subreddit along with the caption “Just turned 89 and I’m enjoying life more than ever!” She then began refreshing the post over and over, hoping to see some encouraging comments like she’d seen on similar photos of elderly people on the popular aggregation site, but, crushingly, the encouragement would never come. Instead, Grandma’s post was soon inundated with cold, nasty comments calling her names like “worse-looking Paula Dean” and “dusty bullfrog-neck-ass bitch,” and it rapidly accumulated thousands upon thousands of downvotes, sparking an outpouring of rage from Redditors all over the world that left Grandma sitting heartbroken in her computer chair, sobbing into her hands.

“This is the ugliest picture i have ever seen,” read another popular comment.

“You look like if a Wayans brother put on a bunch of makeup and prosthetics to play an old racist white lady in a movie,” read another.

“Bitch got the same haircut as ronald mcdonald,” read another.

As the day progressed, Grandma’s photo continued to gather more and more hostile attention, with people sharing the post widely across other social networks until it eventually achieved a level of viral notoriety typically reserved for white supremacists and pedophiles.

With each passing hour, countless new mean-spirited variations of Grandma’s photo were uploaded to different subreddits, whether as part of a massive contest on r/photoshopbattles to crop her likeness into various gruesome Medieval torture scenarios, or as riffs on a wildly popular new meme format called “Susan Shits-Her-Pants,” the accompanying captions of which depict Grandma as a belligerently petty woman who violently shits her pants in anger whenever she’s slightly inconvenienced by service industry workers (e.g., “Tries to order a discontinued menu item. Blasts ornery diarrhea in your face when you tell her it’s no longer available.”).

While the number of downvotes on a post are not made visible on Reddit, a spokesperson from the site confirmed that, by early afternoon, Grandma’s selfie had become the most downvoted post in history—and by a significant margin.

“The very gross and upsetting picture posted by u/Godlovinggranny is by and far the most unpopular piece of content ever uploaded to Reddit, having now collected over 40 million downvotes from users who are disgusted by the sight of this woman’s bloated, sneering hog-face,” said Reddit CEO Steve Huffman in a statement. “While we at Reddit strongly believe in freedom of expression, we feel that this user has egregiously abused our platform by spreading such a sickening photo, and our hope is that law enforcement will see the shameful thing this woman has posted and send her to prison for life.”

It goes without saying that this whole episode has been profoundly upsetting to Grandma. All she wanted to do was share a nice picture of herself to spread some joy to strangers, but apparently even the most friendly, innocuous gestures are capable of inciting the ire of the internet hate machine. She will now forever be known online as “Susan Shits-Her-Pants,” and it’s all because of one universally reviled selfie. RIP, Grandma’s inbox.