‘My Goal Is To Become So Great At Snowboarding That Christopher Meloni Is Referred To As The Chloe Kim Of Acting’: 5 Questions With Chloe Kim 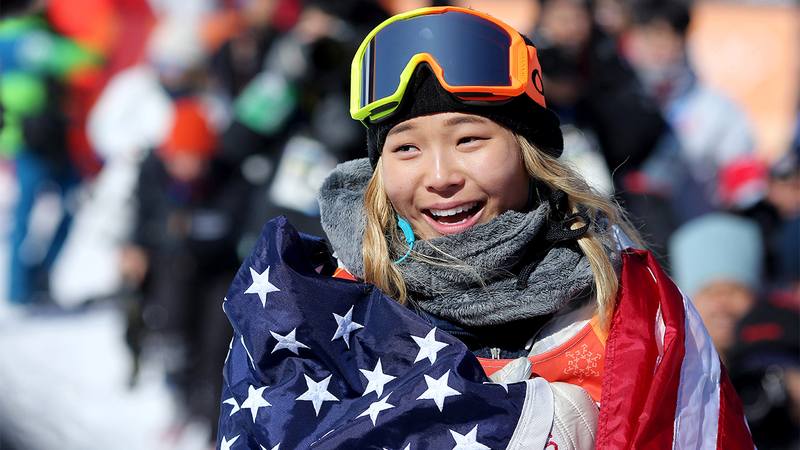 Olympic gold medalist Chloe Kim became a household name this year after beating out her competition with a near-perfect score at the 2018 Winter Games, and by the looks of it, this young athlete is only getting started. We sat down with the snowboarding star to ask her about her experience in Pyeongchang, and what’s next for her snowboarding career.

1. What originally led you to pick snowboarding as your primary sport?

From an early age, my parents would wake me up every morning by screaming the word “snowboarding” at me. My room was decorated top to bottom with posters that were blank except for the word “snowboarding,” and my dad would contort his body into the shape of a snowboard every time I looked at him. Also, my only pet growing up was a snowboard that had several live ferrets duct-taped to it. So snowboarding was kind of always on my mind.

2. At just 17 years old, you’re the youngest woman in Olympic history to win a gold medal for Women’s Halfpipe. What does that honor mean to you?

Oh, that’s a mistake. I’m actually 117 years old. But yeah, I am absolutely thrilled to be the oldest woman to win a gold medal in Olympics history—I’ve been dreaming about this moment since I was a little girl in 1908.

3. What is something you’d like to accomplish between now and the next Winter Games in 2022?

My goal is to become so great that Christopher Meloni starts being referred to as “the Chloe Kim of acting.”

4. As the daughter of South Korean immigrants, what was it like for your first Olympics appearance to be in Pyeongchang?

Being here in South Korea has given me the opportunity to fulfill my mother’s dream of finding the turkey pesto panini that she accidentally left in the Seoul airport on her way to the United States back in 1982. I checked with the airport’s lost-and-found department immediately when I arrived here, and guess what? They found it right where she left it. Just seeing how happy my mom was polishing off the rest of that sandwich was worth far more to me than a gold medal.

5. You’ve achieved pretty much all there is to achieve in a snowboarding career. Do you plan to continue snowboarding competitively for the rest of your life?

That’s tough to say. I don’t know if I’ll be snowboarding for the rest of my life, but the rest of Dan Aykroyd’s life for sure.