To Denote The Passing Of Time, Episodes Will Cut To Kristen Bell’s Corpse In Various Stages Of Decay Back On Earth: Everything You Need To Know About ‘The Good Place’ 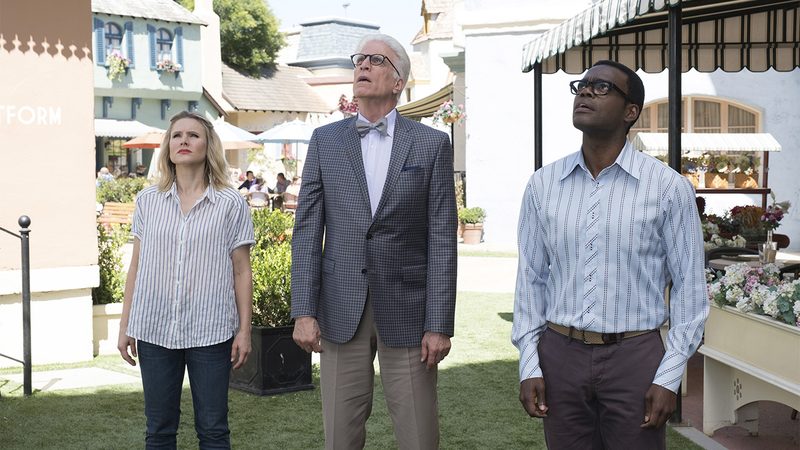 With so much TV being produced today, it’s getting harder for shows to earn must-see status. The Good Place earns that status in its premise alone: Set in the afterlife, the story follows Eleanor, a woman who wakes up in the show’s version of heaven only to realize she may have avoided damnation in the Bad Place by mistake. Here’s all you need to know about the most unique comedy on TV right now before the third season starts!

1. This show marks the first time Ted Danson has played an immortal demigod hell-bent on slowly torturing a group of people who believe he is their friend since his breakthrough turn as Sam Malone on Cheers.

2. The idea never made it to air, but Michael Schur’s original vision for the show’s version of heaven was a drained YMCA pool where the Blues Brothers are having tantric sex with each other for all eternity.

3. To denote time passing in the afterlife, The Good Place occasionally cuts to a horribly graphic shot of the main character’s corpse in various stages of decomposition back on Earth.

4. The show is filmed before a live studio audience full of recently widowed spouses who are unfortunately not quite ready to laugh again.

5. By envisioning a heaven in which people of all religious beliefs—Buddhist, Hindu, atheist, Christian—live together in harmony, The Good Place is notable for having blasphemed the will of God.

6. Lead actress Kristen Bell once revealed in an interview that her husband, Dax Shepard, is going to hell for being circumcised and that he is very much looking forward to it.

7.The Good Place has been lauded for its nuanced approach to the meta-theoretical implications of an ethics system governed by divine command explored in the works of philosophers Jean-Paul Sartre and Philippa Foot, though many fans have criticized the show for ignoring both Rudolph Christoph Eucken’s contributions to ethical constructivism and Hilary Kornblith’s role in developing a working theory of cognitive ethology.

8. Sadly, The Good Place’s popularity has coincided with a rise in militaristic religious groups who kill in the name of the afterlife described in the show.

9. In a twist at the end of the first season, the main character begins to suspect she is in the Bad Place after realizing there are only a few strong, shirtless grandpas from Bowflex infomercials in the Good Place instead of thousands of them.