The Owl Who Got A Job 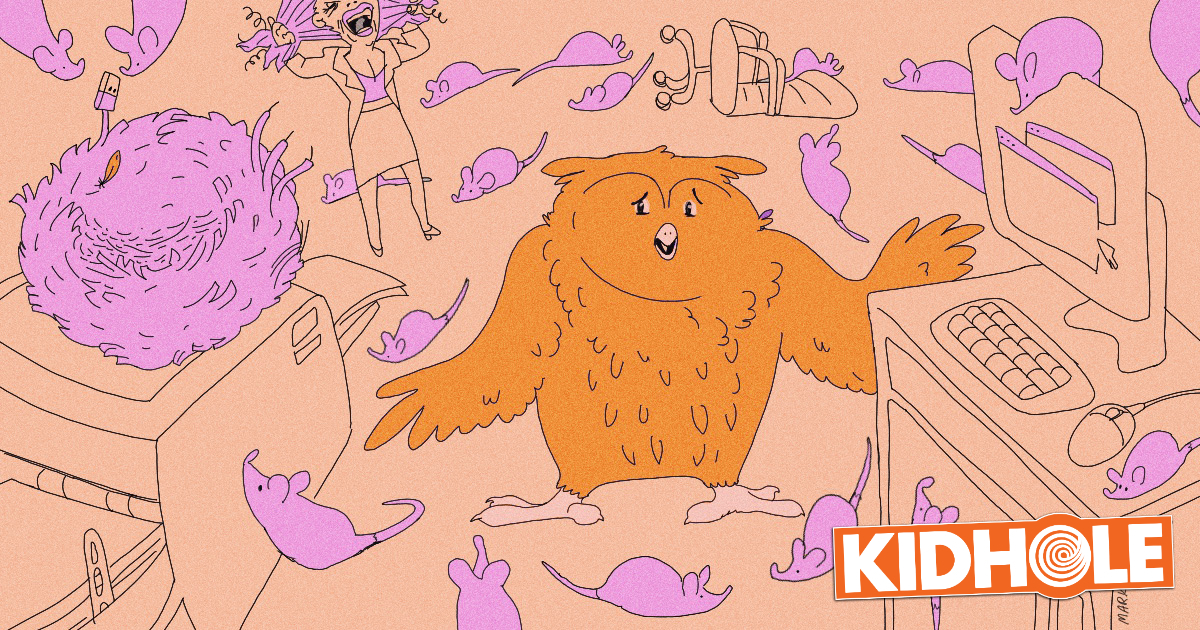 High up in the treetops, just beyond the crick,

Lived an owl named Ronald in a nest made of sticks.

Ronald was a smart owl, and a skilled one at that

He could build you a nest out of anything you pleased

But despite all his talents, Ronald often felt bummed

For he’d become all that an owl could become

He’d achieved everything that he possibly could

And he wanted much more than life in the woods

So I’ll move to the city and start a career

If horse cops and guide dogs can get themselves hired

Then a job can’t be hard for an owl to acquire.”

So Ronald said bye to the only life he’d known

And flew to the city, where no owl had flown

“Ronald’s here!” he yelled once he finally arrived

“No one cares!” a man shouted, then shooed him aside

Among the tall buildings he felt small as a smidgen

To humans he was nothing but a big fat pigeon

He felt out of place, he felt terrified

But then he saw a sign: “HELP WANTED – APPLY INSIDE”

He walked up to the door, he turned the knob

Then stood tall and proclaimed, “I would like a job!”

“We need an IT guy,” a human explained.

“Do you have experience? Are you properly trained?”

What IT meant, Ronald did not know

But he had experience and training, though

Experience in hooting and catching of mice

And training in building nests, neat and precise

I can do any task with great skill and speed”

“Cool,” said the human. “Can you start right away?”

And with a smile, Ronald said, “How ‘bout today?”

And so Ronald was hired as the new IT guy

At the very first company to which he applied

But before he could celebrate or savor the news

“Fix the printer,” said his boss, “for it seems to be jammed.

Then clean my computer of malware and spam.”

What a printer was, Ronald was not aware

Maybe that thing? he guessed, and started fixing a chair

“Not that!” snapped his boss, “The printer’s right here!”

“Whoops,” blushed Ronald. “Must not have heard you clear.”

He waddled to the printer—a strange big white box

And looked it up and down, and gave it some knocks

Not sure how to fix it, he did what he did best

He climbed in the printer to start building a nest

He ripped out all the wires and wove them like sticks

Into a comfortable nest—the perfect fix!

“Well?” asked his boss. “Is the printer all repaired?”

His boss said, “Here’s my computer, on which nothing works well,

From the browser to the mouse to Microsoft Excel.”

At “mouse” Ronald smiled, for with mice he was a pro

He knew everything about mice that an owl could know

He said, “No prob, boss, I know exactly what to do.

Come back in a bit, and it’ll work just like new.”

He then opened the window and flew out in the street

He caught them by the dozen and brought them inside

Thinking to himself, I’m a great IT guy!

His boss jumped up on her desk as mice scrambled about

And screamed at poor Ronald, “GET THESE MICE OUT!”

“What’s the problem?” asked Ronald. “You had a broken mouse

And now you’ve got good ones crawling all over your blouse.

What’s more, your printer was a malfunctioning mess

But now I’ve repaired it with a functioning nest.”

You can’t do in an office what you’d do in the woods!”

Ronald felt like crying. His heart sunk in his chest

For he had failed at his job despite trying his best.

Head down in shame, he waddled out the door

Embarrassed for having aspired to more

Yet just as he thought this, something lucky occurred

A mouse darted past him and he caught it with ease

Then someone yelled, “Forget a mousetrap and cheese!”

A human in work boots then came into view

And said, “Nice catch, pal—I could use a guy like you.

I’ve got a mouse problem at this warehouse I run

And I think you’re just the guy to get the job done.”

And just moments after thinking he’d have to retire,

This human shook Ronald’s wing and told him, “You’re hired!”

Ronald started at the warehouse and excelled right away

Catching over 20 mice on his very first day.

But he didn’t just catch mice—he did so much more!

For he had the perfect skills for the warehouse floor.

He flew high to reach shelves that the forklifts could not

And with his keen eyes found things no humans could spot.

He created a system for organizing tools,

Arranging them alphabetically in nests he had spooled.

And being nocturnal, he could patrol at night

Rotating his head to keep watch of the site.

Now with the best job he could ever hope to find,

Ronald proved he could do anything to which he set his mind.

So if you want to do big things but are filled with fear,

Remember the story of the owl who got a career.